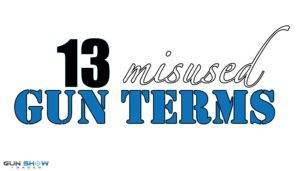 The following are standard definitions of the most common missed gun terms. They have been put astray from the original meaning. Sometimes the truth is distorted via the media. Others are just simple confusions and common inaccuracies. This is great place to start if you’re speaking or writing about firearms and their associated topics. Refer to these definitions in order to offer a clear and uniform point of view free of preconception.

All persons including veteran gun owner to someone who is just starting out has at some point misused gun terms. Knowledge is power. Get to know these terms and definitions. It’ll help carry on a conversation free from prejudice and inaccuracy. 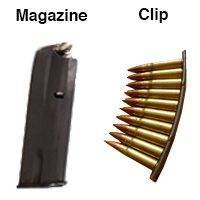 You’ll often hear these two terms being used in a synonymous way, but here’s the thing: they’re not the same. Yes, they both hold ammunition, but neither of these look alike or function in the same way. They are not interchangeable sources. A magazine is an enclosed container that has a feed spring within it, a follower and feed lips; after firing the first round, the recoil forces the slide back, ejecting the spent cartridge. When the slide moved forward again, the gun’s recoil force-feeds a new live round from magazine to chamber.

Clips, on the other hand, have no spring. They do not feed shells directly into the chamber. Instead, the clips hold cartridges in the correct place to be pulled through the specific firearm’s magazine. They don’t stay in the gun once you’ve loaded the rifle’s magazine. Stripper clips allow for the rounds to be “stripped” into the magazine, which means they’re fed into the magazine itself, and not firearm.

An easy way to remember these terms is as goes: Clips feed magazines; magazines feed the firearm.

“Assault Rifle” is a commonly misused term in conversations regarding firearms, and certainly one of the most harmful in relation to public perception, but it’s definition is simple and matter-of-fact: a military issued selective fire or fully automatic rifle with a short overall length designed to fire a reduced power rifle cartridge. As for the term “assault weapon” it clearly means nothing, and it’s closest term has been defined above.

“Assault rifles are short, compact, select-fire (i.e. both semi-automatic and full-automatic) weapons that fire a cartridge intermediate in power between submachinegun and rifle cartridges.” as the U.S. Army defines it. That means that AR-15’s and other civilian rifles do not apply. They are semi-automatic (“self-loading”), meaning they fire once from a self-contained magazine and reload automatically until ammunition supply is exhausted. Often, they’re incorrectly referred to as machine guns.

Automatic weapons, also knows as machine guns, are military weapons that are capable of firing until running out of ammunition, so long as the trigger on the firearm is pushed down. All around the world these weapons are usually found only on a battlefield.

Semi-automatic weapons, however, are civilian weapons. They are less capable of continuous firing, and although the firearm automatically reloads itself, the shooter must pull the trigger each time in order to for another round. Semi-automatics are usually pistols, rifles and shotguns (AK-47, AR-15 and MAC-10 machine pistols).

Generally speaking, there are two types of machine and semi-automatic guns: recoil-operated and gas-powered. Recoil-operated causes a “blowback” or recoil that occurs when a shot is fired and sends the barrel backward rapidly, ejecting the empty shell casing and loading a new live round into the chamber. Gas-operated guns harness the gas from a fired round to drive a piston into the weapon’s barrel, ejecting the spent shell and cocking a fresh one. These automatic loading features mean that the user doesn’t need to cock the weapon hammer in order to load a new live round. 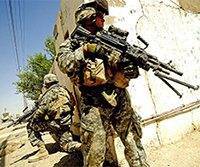 Military rifles have to meet a list of specific requirements to be considered, and this always includes features that will be useful to the soldier in the field; most of these requirements would be useless to a civilian, anyway. In all likelihood, your military-looking rifle was simply fashioned to resemble something you’d see in the military, but their operations are not the same.

First of all, there is no such thing as “high-capacity ammunition” or “high-capacity weapons.” Ammunition (bullets) has one capacity, and that is to hit a target. High capacity is in reference only to magazines, which is the device that feeds the ammunition into the firearm.

Weapons come furnished with a magazine that holds 10-17 rounds, making that the standard for the weapon. However, there are certain magazines that can hold up to 33 rounds, making it a high capacity magazine. The term is oftentimes misused by the media to refer to any firearm feeding device holding more than whatever number of cartridges they deem to be unnecessary.

In the debate of Pistols vs. Handguns there are many people who use “handgun” to describe any hand-held firearm, but use “pistol” only in reference to semi-automatic handguns. While there’s some debate over this, it’s best to say that the term itself is one of personal preference.

The NRA Firearms Sourcebook defines a pistol as “a generic term for a hand-held firearm. Often used more specifically to refer to a single-shot, revolver or semi-automatic handgun.”

In the late 16th century the term “pistol” was widely used to describe hand-held guns, and then Samuel Colt described his cylinder-firearm invention as the “revolving pistol.” The word pistol is clearly an established term within the world of firearms, coming along far before the semi-automatic handgun, so it would be a safe bet to say that all handguns are pistols, and that all pistols are handguns. 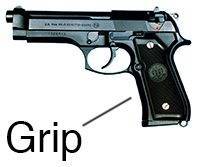 While a grip is technically a handle, grip is the proper term for the part of the gun that you hold in your hand. Grip can also refer to how you hold your gun; when holding a gun properly, which you should always be doing.

Handle isn’t tossed out of the lexicon of gun terminology, though. There are times when someone may post the questions “how does that gun handle?” or “can you handle a gun?” to which you can answer yes if you know how to safely operate, aim and hit a target. As for how a gun handles, well that you’re personal opinion about how a gun shoots. 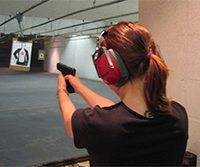 While these two terms are often used interchangeably, they describe two separate aspects of landing shots on a target. Accuracy is the measurement of the shooter’s ability to hit a given target consistently; precision is the tightness of those shot-groups (how close together the shots place).

An example in their difference is this:

Rifles that can consistently hit their target in close groups may often be described as accurate, but it’s actually an indication of good precision instead.

Bullet vs. Cartridge vs. Caliber 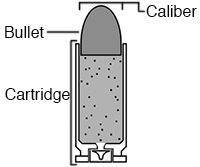 There are a number of differences between the terms “bullet,” “cartridge” and “caliber.” Yet it’s common to hear these terms being used in the wrong way by people that seem to not know any better, or simply don’t care what they’re asking for. A bullet is a simple projectile that exits the barrel. It’s a non-spherical chunk of metal or other material intended for use within a rifled barrel.

The caliber is the measurement of the bullet’s diameter, usually expressed in millimeters or hundredths of an inch. 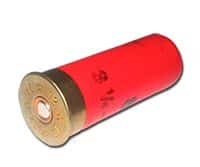 Shells and Shotshells are often confused due to the similarity of the words, but there are differences between them. Most people operate under the impression that “shells” only refer to shotgun cartridges, but those are actually what shotshells are for; generally referring to a round of shotgun ammunition, most accurately ones containing pellets rather than a slug or other projectile.

“Shells” is the accurate term for any handgun, rifle or shotgun cartridge or cartridge case, which is explained above in Bullet vs. Cartridge vs. Caliber. 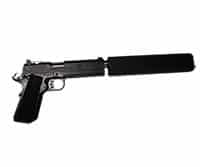 There are reasons why these terms get mixed up so often, and that’s probably because numerous sources (i.e: NRA Firearms Sourcebook and The Bureau of Alcohol, Tobacco, Firearms and Explosives) have opposing views on the terms. For the sake of clarity, we’re going to go with the distinction made by the NRA Firearms Sourcebook: “a device attached to the muzzle of a firearm to reduce the noise of discharge. Sometimes incorrectly called a ‘silencer.'”

Guns that fire in complete silence do not exist, so it’s best to eradicate the word itself from your vocabulary when referring to this device. The suppressor, commonly termed as a silencer, merely “suppresses” the escaping gases, reducing but not eliminating the noise of the discharge. 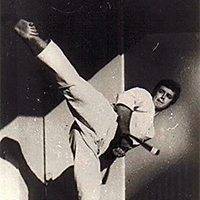 This is a matter of general colloquialism and personal taste, though to be literal there is no way that a gun can kick you back by definition alone: it has no feet.

The force that is created within the gun’s chamber due to expanding gases causes the gun to physically push back toward your hand, bringing people to coin it as a “kickback” or kick for short. The proper term for this push of force caused by the bullet exiting the barrel is the recoil. 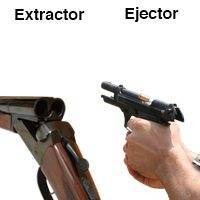 In semi-automatic weaponry, the ejector is a small blade positioned opposite the ejection port. The extractor pulls the shell toward the rear of the gun until it meets with the ejector, which will release the port. However, there are exceptions when it comes to this. Double-barrel shotguns are known to be extractors-only; the chamber is designed to slightly extract spent shells, making it easier for the shooter to remove it from the chamber. Some other double-barrel shotguns have built-in ejectors that will spring the spent shells from the gun, making it unnecessary to have an extractor.

END_OF_DOCUMENT_TOKEN_TO_BE_REPLACED

Get your shows noticed and your products sold. We have both email advertising and premium listings available.